Check Out The Fat Chef Video !!! 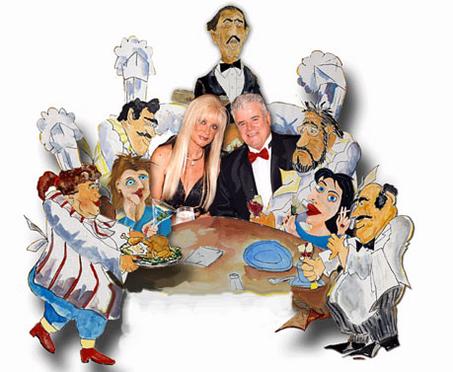 Traveling the big cities and the back roads of America, the Near and Far East, Europe and the rest of the world, Richard has eaten in the named bistros and the local haunts, the fish fry’s of the Bahamas and the pushcart vendors of Berlin. A chef in his own right and a connoisseur of good food, no matter where he finds it, Richard puts brush to canvas to show you the comical side of Chefs and Restaurants. Dubbed  the “Fat Chef Series”, they are vignettes of stoic waiters, overweight chefs, Pizzerias, Burger Bars, Lobster Fests, Fish Fry’s, Conch Chowder and just kicking off your shoes after a long 12 hour day at the restaurant. Richard looks at the lighter side of restaurants and chefs and immortalizes these images onto canvas in cascades of bright colors and he captures the wonderful expressions of the waiters and chefs. The inspiration for some of the pieces are drawn from Richard’s personal experiences, others from his imagination. In “Moonlighting”, Richard has immortalized one of his life long friends onto canvas, a man who had a stressful job in the entertainment business and just wanted to get away from it all and flip burgers in Taos, New Mexico.. There is something for everyone in the Fat Chef Series, something that everyone can relate to and smile. Join Richard as he takes you through the back door and into the kitchen to see the whimsical side of Chefs and Restaurants.